For our program entitled Artist’s Mind (aired March 1, 2011), we featured stories and segments on the esoteric workings of the brain and the often silent sufferings of artists with mental illness.

Covering 50,000 feet of with glass, cracked bric-a-brac and shattered mirrors on Philadelphi’s South Street, award wining mosiac artist Isaiah Zagar has been exhibited all around the world including my hometown of Racine, WI.  He is most known for The Magic Garden, an indoor/outdoor maze of mosaics, that is now an institution of Philadephia. Jeremiah Zagar sat down with me to reflect on the seven year experience documenting his father, In a Dream, that was on the short list for the academy award and is now available on HBO Films DVD. When Jeremiah was 19 years old, his mother requested he film father.  he found it a challenge to capture his father honesty without getting the artifice of what he created so after being comfortably uncomfortable in a cabin in West Virginia, In a Dream began throughout the7 years of documenting his father, he found the story and its the love relationship between his mother and father while dealing with a nervous breakdown and an affair. 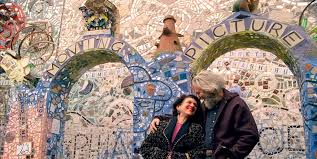