Over 50 years, WBAI 99.5 FM  in New York City has launch the music careers of many musical legends. Bob Dylan, Pattie Smith, Gil Scott Heron, and the Ramones, to name a few, were all heard on WBAI first. Continuing th tradition of bringing new music artists to the airwaves through live performance, The Artsy Fartsy Show is becoming a tour de force in New York City with its new monthly AF Sessions.

AF Sessions is a cross between a live intimate in-studio concert and a demo recording exclusive to the AF Sessions. Each month an artist is selected by AF Sessions Curator, Jack Dourakos and the Executive Producer, Barika Taheer Edwards to perform for a small audience at the WBAI studios at 120 Wall Street in New York City. The limited seats are free and audience members can sign up by calling WBAI or by reserving on the Artsy Fartsy Show website. A portion of the AF Sessions broadcasts during the Artsy Fartsy Show (Tuesdays, 2pm EST) where terrestrial and online listeners can be apart of the AF Sessions experience.

In the imperssion age of digital music. The deeper meanings, the story behind the songs, and the songwriter is lost in the simplicity of downloads. AF Sessions is about connecting the artist with the listener again.” – Jack Dourakos, AF Sessions Curator

What makes the AF Sessions special is a physical audience sits in on the session and has an enhanced concert experience.  The artists that are on the brink of becoming music sensations, share their stories and the artistic process behind the songs the perform, Dourakos interviews the artists and sometimes audience members get to ask questions themselves. The AF Session artists come from an array of genres and styles, and foremost are diverse in originality, creativity and have a unique sound. 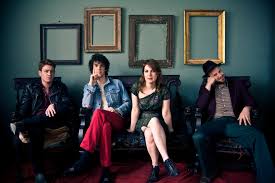 The Lisps, a New York-based co-ed assemblage of 21st century theater prone indie rockers will perform on September 27, 2011. Their songs border the literary and borrow liberally from vaudeville, Anti-Folk, science fiction, and Americana. Their hyper-active performances typically involve bloody tambourines, wrestling, lipstick smeared melodicas, old filing cabinets, and film reels suspended by rusty chains. The Lisps are set for a 2011 release of their 3rd album Are We at the Movies? and their Civil War sci-fi musical FUTURITY, which has had 15 workshop performances, will have its World Premiere in February of 2012 at the American Repertory Theatre in Cambridge, Massachuttes.
The First AF Sessions was with Stately Ghosts. Here is a video with Stately Ghosts thanks to WBAI’s Kathy Davis.

To join the studio audience of the AF Sessions visit artsyfartsyshow.com/af-sessions. Listen to AF Sessions broadcasts on the Artsy Fartsy Show on 99.5FM in New York City or online stream wbai.org.