Best Films of 2011 (TV too)
– Barika Edwards This year it seemed like we were perpetually watching a sequel, remake or even seeing the same movie twice with just a new cast (i.e Friends with Benefits Vs. No Strings Attached – dissing films about open relationships while dissing romcom and yet  falling into its traps; Melancholia Vs. Another Earth – planetary collisions).  Towards the end of the year, Hollywood seems to homage itself – The Artists, My Week with Marilyn and Hugo. When I look at my lists there were some real daredevils in film in 2011 who took risks even if it meant rewinding history to acid-trippy dinosaurs and lava lamps, to daring dual performances that hopefully will not stay under the radar during the awards season.

The Artist is a silent film that is not quite quiet. I almost missed this one because I was hesitant to watch a silent film, but I am glad I did. It is a special treat to watch the fall of silent movie star who does not want to conform to the new movement in film towards talkies. While one falls another rises, a dance girl becomes the face of talkie films. Go see The Artist it is a treasure.

9. My Week with Marilyn

Michelle Williams plays the doe-eyed Marilyn Monroe who is completely dedicated to the progress of her acting method. Monroe clashes with Laurence Olivier, played by Brittan’s modern  Olivier like actor – Kenneth Branagh (who also directed Thor) but in the end Monroe influences Olivier to drop his artificial poise to perform the best role of his lifetime in John Osborne’s play The Entertainer. Wonderful breakout performance by Eddie Redmayne who plays  Collin Clark, who narrates his book about his week working on a film in England and falling in love with Marilyn Monroe. If you love history and are an actor you will appreciate this film.

Contagion came out in the fall of 2011 with a stunner cast of top notch celebrities.  Matt Damon plays a Minnesotan father who loses his wife, the first patient to die and step-son.  His wife after returning from China has transmitted the mysterious “swine flu-esque” like disease around the Midwest and anyone she came into contact with infecting others around the world.  While the world tries to come to grips with this spreading epidemic, preventing mass chaos while still trying to get ahead of the disease scientifically. Laurence Fishbourne plays a CDC director who works with the scientists and investigators trying to get control of a spiralling epidemic but now one is spared indiscriminately by its path.
Steven Soderberg’s direction gives a more realistic end of the world possibility than Day After Tomorrow. The truth, world-wide  bureaucracy and corruption with the timely  release of public information stall advancements and prevent people from knowing the truth. It takes a challenging blogger, played by Jude Law, to spill much needed information to the masses.

Terrance Malick’s  visual masterpiece about life, love, and faith from the dawn of earth to the metaphysical afterlife.  Tree of Life was a smart and daring film of the year 2011, if anything it ws the most inspired film of the year.  Read my full review https://artsyfartsyblog.wordpress.com/2011/06/07/life-and-death-the-symphony-through-art/
6. Hugo 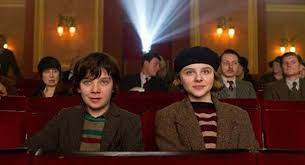 Martin Scorsese’s Hugo also homages to the decadency of film making and the magic creativity like The Artist and My Week with Marilyn. Hugo in 3D is actually worth seeing as many of the films this year are completely grumble worthy for their sad attempts to cash in at the box office.  Hugo is about a little orphan boy who lives in a Parisian train station maintaining the clocks while trying to fix and solve the puzzle of his animatron, Hugo.  Hugo also has a wonderful artistic message that is not far off from The Artist’s Way by Julia Cameron.  I highly recommend this film for artists who loved  the film history presented in The Artists and the artistic integrity told in My Week With Marilyn, Hugo has it all wrapped in one film.

Carnage is was wonderful adaptation of Yasmina Reza’s play, God of Carnage,  which is now a theatre classic performing in regional and international theatres today.. The direction was excellent which didn’t detract from the wonderful script and the sense of theatrical drama. A lot of play to screen film adaptations do not transition as well, and the intimacy of the stage is lost, but Polanski did it brilliantly. I loved the portrait of marriage, parenting and repressed honesty. Carnage is a humorous slow burn of hospitality and hostility.

An actor to watch out for is Joseph Gordon-Levitt he brings layered characterization to his roles that surprise you with their complete mirror of the human condition. 50/50’s cast including Seth Rogan, Angelica Houston and Anna Kendrick, director, Jonathan Levine;  and writer, Will Reiser  do just that in a witty and endearing story about a young radio producer who finds out he has cancer.  The film gives an interesting perspective on the highs and lows when dealing with mortality. Its one of the films this year that kept me thinking about the film long after the lights and the theatre rose.
50/50 – Best in Film 2011

Occupy Wall Street calls for better wages and employee dignity and promises of CHANGE since 2008. But After watching The Help I said to myself. “Wow, nothing really has changed.” The Help’s film adaptation of Kathryn Stockett’s book The Help has a powerhouse female cast including break out performances by Octavia Spencer and a Lindsay Lohen looking/sounding actress, Emma Stone.  Black Mississippi maids assist a new college graduate on her book by telling the truth about how they feel working a maids for white families.

One of the funniest yet provocative films of the year. Its like Goonies in the ghetto.
When aliens land around the housing estates in inner-city London, 6 boys who have experienced hard knocks of life but are still kids at heart. These boys have consequences to their delinquent behavior. As more aliens come down to attack their project apartment building – its the inner city vs the outer limits.

Attack the Block came out during the summer around the time Super 8 another aliens attacking kids film, yet its been done before. Attack the Block presents the issues of class and race and how assumptions and survival are made.

Chilling, Sadistic, Insane. The Devil’s Double kept me on the edge of my seat and my head shaking with complete appall of the actions of Uday Hussein told from the perspective of his body double,  Latif Yahia, both played seamlessly (although his British accent did come through at time) by Dominic Cooper.
The lives of these two men are fascinating. Latif is spotted by Uday who plucks him away from his life and forces him to become his body double. While the child-like to-have-been future dictator is awful, you can see a glimpse of reasoning behind his insanity and need for closeness to his father. Uday is someone you are completely on edge for the fear of his changing mood and your life. Cooper’s performance as both men is phenomenal and I hope it will garner some award nominations. If you liked Last King of Scottland, you must see this under-the-radar film.

(would have liked to have seen it but unfortunately did not get any press invites.  I have liked Steve McQueen’s films in the past and expect no less of raw and ugly side of human dignity). The Beginners, Thor, Harry Potter: The Deathly Hallows Part 2 and Melancholia.

With all the drama about union contracts and rights. Peter Jackson continues to film the two installations of J.R Toilken’s The Hobbit. The official trailer was released in mid-December 2011 but will not be released till Dec. 2012.

Snow White and the Huntsman

Again like 2011, two versions of the same concept or story are released. I am looking farward to see visual mastermind, Tarsem’s take on “Snow White”. The Artsy Fartsy Show sat down with one of the designers working with Tarsem on this film and Immortals. http://www.archive.org/details/RafaelKayananOnWorkingArtisticallyOnTheFilmImmortals I have to give this to The Misfits on E4. This ingenious television show about juvenile delinquents who are struck by lightning during a strange storm and survive with powers.  The five juvenile delinquents do not change their mentality even though they have powers which makes this smart show very funny and unlike any show on tv today. Honorable mention: Being Human on BBC which might have possibly reached its demise as actors Aidan Turner films the Hobbit and Russell Tovey leaves the program.