What we thought were the most prolific and wonderful things in art during the year 2011.

An actor to watch out for is Joseph Gordon-Levitt he brings layered characterization to his roles that surprise you with their complete mirror of the human condition. 50/50’s cast including Seth Rogan, Angelica Houston and Anna Kendrick, director, Jonathan Levine;  and writer, Will Reiser  do just that in a witty and endearing story about a young radio producer who finds out he has cancer.  The film gives an interesting perspective on the highs and lows when dealing with mortality. Its one of the films this year that kept me thinking about the film long after the lights and the theatre rose.

One of the funniest yet provocative films of the year. Its like Goonies in the ghetto.
When aliens land around the housing estates in inner-city London, 6 boys who have experienced hard knocks of life but are still kids at heart. These boys have consequences to their delinquent behavior. As more aliens come down to attack their project apartment building – its the inner city vs the outer limits.

Attack the Block came out during the summer around the time Super 8another aliens attacking kids film, yet its been done before. Attack the Blockpresents the issues of class and race and how assumptions and survival are made.

Occupy Wall Street calls for better wages and employee dignity and promises of CHANGE since 2008. But After watching The Help I said to myself. “Wow, nothing really has changed.” The Help’s film adaptation of Kathryn Stockett’s book The Help has a powerhouse female cast including break out performances by Octavia Spencer and a Lindsay Lohen looking/sounding actress, Emma Stone.  Black Mississippi maids assist a new college graduate on her book by telling the truth about how they feel working a maids for white families. I have to give this to The Misfits on E4. This ingenious television show about juvenile delinquents who are struck by lightning during a strange storm and survive with powers.  The five juvenile delinquents do not change their mentality even though they have powers which makes this smart show very funny and unlike any show on tv today. Check out the Misfits on Hulu.com for American audiences.

Spencer’s picks for best in Theatre 2011 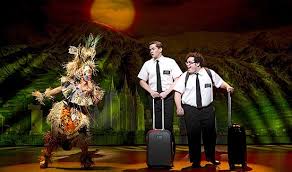 #1 – I know it sounds crazy to tell you that my number one show of 2011 is actually a show that I’ve never seen….but that’s because it’s so popular, it’s so in demand, it’s on EVERYONE’S must see list…resulting in me not being able to even get a ticket to see it this year. The show is BOOK OF MORMONwritten by South Park creators Trey Parker and Matt Stone, in cooperation with Robert Lopez who penned the off-color Broadway smash hit Avenue Q. Not since Wicked have I seen Rush Ticket lines extend all the way around a city block.

I HAVE however listened to the cast recording, and think that it’s one of the most intelligently funny things to hit Broadway in a long time. It sounds like Mel Brooks, Avenue Q and South Park had there way with Rogers and Hammerstein and a Mormon Lovechild was the result.

The BOOK OF MORMON follows two young missionaries who are sent to Uganda to try to convert citizens to the Mormon religion. One missionary, Elder Price, is an enthusiastic go-getter with a strong dedication to his faith, while his partner, Elder Cunningham, is a socially awkward but well meaning nerd whose tendency to embroider the truth soon lands him in trouble. Upon their arrival in Africa, Elders Price and Cunningham learn that in a society plagued by AIDS, poverty and violence, a successful mission may not be as easy as they expected.

#2 – On an opposite note, my next pick I not only had the pleasure of getting to see….but I was so moved by it, that it left me crying on the elliptical at the gym an hour later…I don’t embarrass easily, but I got a lot of odd looks that day.

THE NORMAL HEART is Larry Kramer’s masterwork about a city in denial. It unfolds like a real-life political thriller—as a group of friends refuses to let doctors, politicians and the press bury the truth of an unspoken epidemic. A quarter-century after it was written, this outrageous, unflinching, and totally unforgettable look at the sexual politics of New York during the AIDS crisis remains one of the theatre’s most powerful evenings ever. It won Best Revival of a Play at the Tony Awards, Drama Desk Awards, and the Outer Critics Circle Awards. This limited engagement played its final performance on Broadway on July 10, 2011.

#3 –  My third pick is yet another hard to come by ticket and it will get even harder now that the movie adaptation is out. WAR HORSE travels from the lush English countryside to the fields of France and Germany at the outbreak of World War I. A boy’s beloved horse has been sold to the cavalry and shipped to France. Caught up in enemy fire, the horse serves on both sides of the war, and survives an odyssey that leaves him alone in no-man’s land. The boy, now a young man, cannot forget his horse, and embarks on a treacherous mission to find him and bring him home.

WAR HORSE is an outstanding drama, filled with gorgeous music and beautiful songs. There are breathing, galloping, charging horses on the stage – built of steel, leather and aircraft cables. They are life-size puppets strong enough for men to ride. That alone was worth the ticket price!

Moxis is a surrealistic dance company under the direction of Moses Pendleton. They are known for their use of props, playing with light and shadow and adding humor to their dance pieces. This contemporary dance company is based in Connecticut and is currently travelling the world with their show, BOTANCIA, which performed at the Joyce Dance Theatre here in New York City  in December.

BOTANICA is a poem written by Pendleton which is a naturalistic journey through the four seasons. The imagery is magical. I was amazed that a show with spectacular costumes, props and puppetry, including a rideable triceratops puppet was only for $10. While watching this riveting show I could hear gasps from other audience members and I didn’t want to leave this fantastical world built by Momix.