The Apocalypse of John – Venue # 10 : The players Theatre 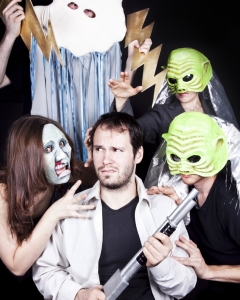 The end is near, or is it not ? Well for John Darrian, the end is one more whiskey away ! An absolutely hysterical comedy about John Darrian who had one too many drinks at a bar, and began hallucinating while saving the world from aliens, terrible storms, and Satan who happened to be a person he was very familiar with at the very bar where he initially got drunk in.

I was very intrigued by the character who played Satan, as he contributed to most of the hysterical moments in the play. Also John’s persistent boss who hadn’t given him a chance to explain his paranoia and the constant emergence of these Aliens in which only John Seemed to be seeing. The play ended in Triumph, and to answer everyone’s burning apocalyptic question, no the world does not end after all.